Good news on the trash can front. “The Bottoms” as it is referred to- the area around San Julian St. & 5th- has seen a tremendous increase in serviced trash cans in the last year and a half! The placement of these trash cans listed in this map represent the culmination of a HUGE amount of work & partnership between local community residents & the City of Los Angeles. The last map I did was on 7/14/13, HERE. 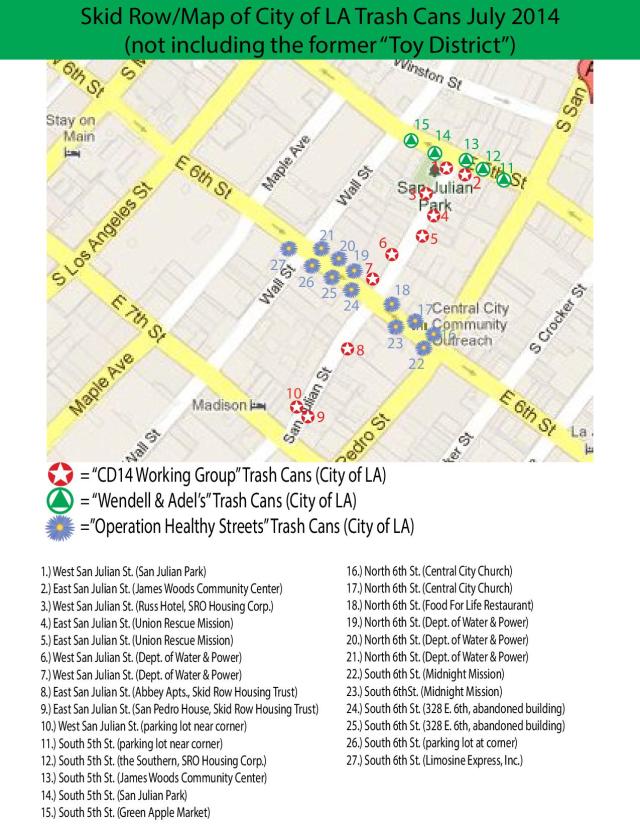 The CD14 Working Group, headed by Ms. Sara Hernandez, assisted the Community in the placement of the 1st cans along San Julian Street. The placement of these cans was determined by consulting with the founders of Operation Face-Lift/Skid Row, who it should be noted were putting out & emptying donated & decorated trash cans for many years before the City stepped in through their Funky Trash Can Campaign. Much thanks to OG Man (Manuel Compito) & General Jeff for their service & dedication to a cleaner environment.

Next came what local folks have been calling, “Wendell’s Trash Cans” along 5th St. These trash cans came to be installed along “The Nickel” as a direct result of a meeting hosted at The Vortex, where local residents got to speak directly to Adel Hagekhalil, who is the Environmental Engineer and Assistant Director of the Bureau of Sanitation. Wendell Blassingame, recently dubbed,  “The Concierge of Skid Row” by the LA Weekly- worked with Adel to get these cans installed along the 5th St. corridor.

Finally, there are the “Operation Healthy Streets Trash Cans” installed along 6th by the City, who by now is very conscious of where local residents feel the need is greatest for trash cans & an improved environment.

The trash cans are being used appropriately & are full or half full most times I see them. I’d say this has all worked out quite well. Now…on to the next project.