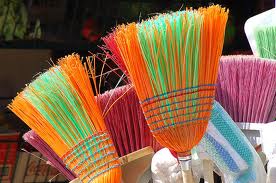 care to donate some brooms?

The last inaugural 2012 event brought together newer downtown residents, or “loft people” as we are euphemistically referred to, with existing Skid Row grass-roots community activists for the first time ever. Since then, and since I have been blogging about Operation Face-Lift, many people have asked me about what this effort actually is- and who is officially in charge. Below are some answers to some commonly asked questions.

Answer: Operation Face-Lift 2012/Skid Row is a grass-roots community based effort to clean our streets and improve our neighborhood. It’s primary focus is improved sanitation for our streets but it also hopes to change people’s mind-set about Skid Row and to restore people’s self-esteem who live here. Operation Face-Lift/Skid Row was started in 2008 by OG’s N Service, Issues and Solutions, the Skid Row Brigade and the Homeless Coalition. Since 2008, this effort has picked up other supporters along the way, including me. There is no one person in charge of Operation Face-Lift, and everyone is welcome join the movement. It is an ongoing 7 days a week campaign. There are many ways to get involved that don’t necessarily include coming to Skid Row.

Answer: Part of Skid Row has a BID (the CCEA), part does not. The blocks west of San Pedro St., east of Los Angeles St. & north of 7th and south of 3rd (excluding a few buildings) do NOT have a BID, and on many blocks have no City services cleaning the streets either. The worst sanitary conditions in all of Skid Row exist on San Julian street.

Question: What are the boundaries of Skid Row?

Answer: Skid Row makes up approximately 50 blocks and is defined by the Ninth Circuit Court of Appeals, as the space between Main & Alameda and 3rd & 7th.

Question: What about the recent court ruling barring the LAPD from picking up trash in Skid Row?

Answer: This is actually an injunction against the LAPD from picking up people’s personal belongings, not trash in the parts of Skid Row not covered by a BID (between San Pedro & Los Angeles St. & 3rd & 7th St. only). You can read a recent local article about this here. Most community members and residents of Skid Row (including myself) have come to understand the there is a vast amount of garbage in the non-serviced parts of Skid Row that is clearly not anyone’s personal property but instead mostly discarded food and food-related wrapping. People’s personal property is separate from trash. There are rare instances where the difference is difficult to ascertain. People’s personal property and the mountains of food-related trash that pile up in this community need to be considered separately and distinctly for progress to be made concerning sanitation in Skid Row. Education to the differences of  these items is something that I hope to perpetuate with this blog. This is an incredibly complex issue and not at all easy to understand let alone explain. 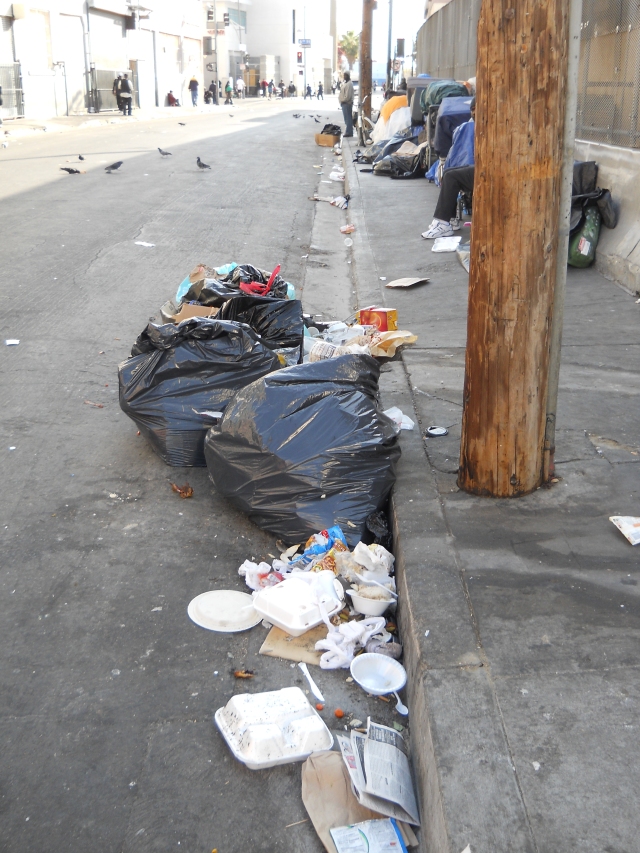 this is San Julian street- it seems clear to me that this is garbage in the foreground, and not people's personal property- it has even been bagged up- when in doubt, why not begin a dialog with the folks on the streets themselves about this issue?

Question: How can I help?

Answer: There are a number of ways you can help. If you would like to help actually clean the streets with us, just show up next weekend at the time and place listed above with some or all of the suggested cleaning supplies listed below. Alternately, if you would like to show up just to watch us clean- this is more than welcome too, and in fact encouraged. Community members will be on hand to speak about Operation Face-Lift and Skid Row in general. The more, the merrier! Donations of cleaning supplies are needed too. Arrangements can be made for donations by emailing me at katherine.trees@yahoo.com.

Question: Is this clean-up event safe to bring children or seniors too? I have heard Skid Row is dangerous and unsafe- especially San Julian street. What should I expect to see in this neighborhood?

Answer: Skid Row, as it exists currently, is still operating under the “Containment Strategy” put forth by City leaders decades ago. This means that within it’s borders, and specifically on San Julian street, you might see drug use, public urination and defecation, public nudity, public sex, fist fighting, drinking, hear obscenity-laced language and the like. That stated, my personal feeling is that Skid Row is very safe and that the people that live here are some of the friendliest which I have ever met. San Julian street is also home to many people- quite a few housed in permanent supporting housing units. The LAPD does an excellent job of keeping this neighborhood relatively violence-free.

Question: What can I contribute? 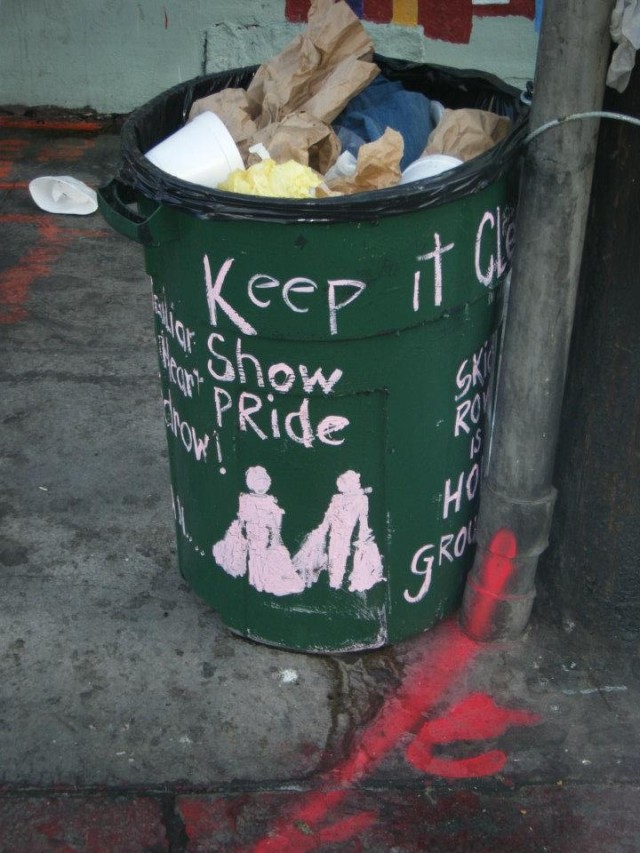 We are also asking for donations of your time and even in getting the word out on social media. Any of the above things can be discussed with me by emailing me at katherine.trees@yahoo.com.

* If you do attend an Operation Face-Lift event, please be respectful of people’s privacy when taking photographs. If you wish to take photos of people on the street, please ask permission first, if possible.